Shake it, shake it, baby! 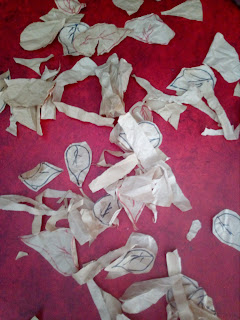 We had an action-packed morning today in Baby Book Club! We read Shake the Tree by Silvia Borando, Chiara Vignocchi and Paolo Chiarinotti and got shaking, shaking to the left, shaking, shaking, shaking to the right. The babies got the idea very quickly and started shaking their teddy, ball, hands, etc, without being asked to. We roared with bear and bravely faced the possibility of being gobbled up. All was well in the end.
We then fixed a badly shaken tree by looking for leaves, animals and conkers to stick back on. This was also quite a brave thing to do as we had to rummage through a deep box where anything might have been lurking. But some babies were very practical and decided the sensible thing to do was to upend said box and spill everything out. So it was done.
We ended the session making it rain conkers: pop them in a paper cup, shake it, hold it high… and rain it down! Endless fun! 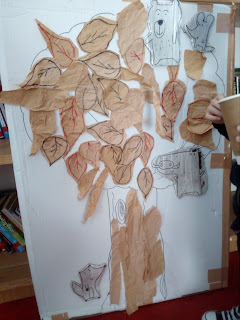 The tidying was a very collective affair today as well, because once the box was full again, it meant you could just…  empty it out once more.
See you all next week for our World Book Day special!
Posted by Juliette Saumande at 12:37 No comments: Links to this post

Love is in the air 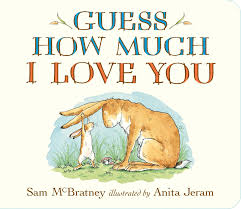 A Valentine's special today at Baby Book Club, with a lively bunch of kids who decided to geographically spread the love in every corner of the library, rather than keep it confined to our circle of bean bags…
Still, we spread our arms and hopped and jumped like Little  Nutbrown Hare and Big Nutbrown Hare, and there was some lovely inter-baby cuddles. 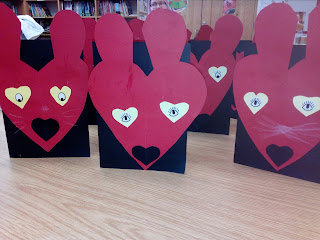 Our craft this week involved fine-motor skills and one of our favourite things: gluing! The room got very quiet again as we plastered our paper with stickpritt, considered where to place heart shapes of various colours and sizes, and carefully peeled star stickers off our sheets. 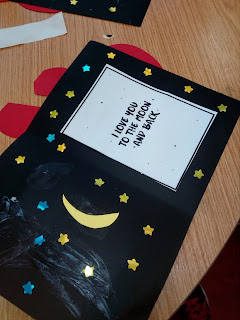 The result was a brilliant bunch of bunnies (sorry, hares) to say 'I love you' this Valentine's season.

As promised, here are the links to the songs and videos!

All You Need is Love by the Beatles

Isn’t She Lovely by Stevie Wonder

Beautiful Boy by John Lennon
Posted by Juliette Saumande at 11:21 No comments: Links to this post 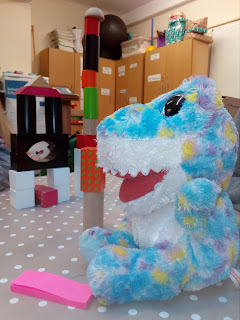 Today, we read about the Tiny King who is a bit lost in his great big castle, protected by his great big soldiers and eating great big dinners all on his own. We related to some of his predicaments, but we also noticed that we were somewhat luckier than him: we at least have teddies to keep us company in our big beds!
As we looked through Taro Miura's colourful pictures we played a bit of spotting and counting and looking for our favourite things to eat. This week again, lots of conversations got started thanks to a book...
Then we moved from the 2D world of the page to the 3D world of building blocks. Inspired by the geometrical shapes of the Tiny King's castle, we built our own towers, houses and even slides! Fine motor skills, balancing, estimating, shape recognition, all came into play without anyone noticing. The best kind of learning!
As promised, the links to the songs and videos!

Brunswick Project: King of the Castle (with goats!):

Chapi Chapo: Le Cube Espiègle, a (psychedelic!) wordless French cartoon from the 80s full of squares and shapes like The Tiny King:

Posted by Juliette Saumande at 13:13 No comments: Links to this post 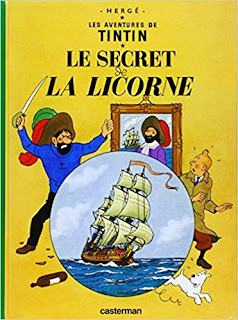 We've embarked on a new adventure, in the comfort of our own home, over the last little while. Who knows how long it will last, but for the moment the participants are keen and hungry for more.
We have set up our own Ciné Book Club, which means that we read books and then watch the movie/cartoon adaptation and we compare.
We started off with two albums of Tintin, as the 7-year-old is obsessed with Captain Haddock (saying she can see something of herself in the hot-tempered, linguistically inventive old sea-farer would be perhaps a bit unfair; perhaps not). We read together (me doing the reading) and separately (the 7yo reading the pictures, the 10yo reading everything) The Secret of the Unicorn and Red Rackham's Treasure, both in French, as Ciné Book Club is a secret, cunning ploy to inject more French into our daily lives.
After watching the now-classic cartoons (in French, then), we had a chat about what was the same and what was different. The first episode was deemed very faithful to the original, with no glaring omissions. Red Rackham's Treasure, however, had skipped some apparently capital bits, in particular the scene where the fake descendants of the infamous pirate crowd Captain Haddock's doorstep and the scene ends in glorious slapstick mayhem involving the Thom(p)sons and a lot of swearing. Greatly missed by our young club members!
Another difference, in both cartoons, was that Snowy didn't speak! But we agreed that we could understand what the dog 'said' thanks to his movements and various doggy sounds. 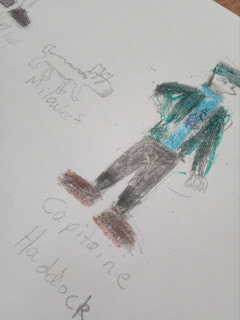 We then talked about voices and music, and what they added, if anything. They loved the series' opening credits, although the 10yo found the images moving inside the comic panels a bit dizzying. It didn't help that they showed Tintin jumping off a high-speed train… But they enjoyed recognising bits from other books (they have read a few at this stage) and were keen to find out more about what wasn't familiar.

I ordered The Crab With the Golden Claws (in French) from the library straight away. 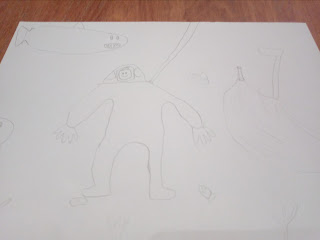 With this inspiration in stock, we moved on to the 'making' stage of our club (let's be honest, I'm making this up as we go along; there's no such things as actual 'stages'!). I had a vague idea that I would ask them to imagine their own treasure to place in Rackham's chest. They could draw it or make a list. Once the pencils were out, however, each went their own separate but parallel ways. We ended up with one treasure chest, a number of Tintins, Haddocks and Snowys, on their own or in situ, drawn from the books or from memory.
The short of it is, we had a ball! We'll see what we give the Ciné Book Club treatment to next. Any suggestions?
Posted by Juliette Saumande at 14:42 No comments: Links to this post 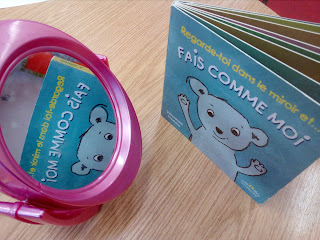 A VERY high-energy Baby Book Club session today! We were reading a French book (those babies are pretty amazing, oui?) about a blue bear who just stands on the page, looking straight at the reader and inviting them to 'do like me': open your eyes, touch your nose, stick your tongue out…
The babies were very happy to follow the bear's lead and improvise in all sorts of directions, especially when it came to blowing kisses and making silly sounds with our puffed up cheeks. (Extra brownie points to the grown-ups who bravely joined in!) 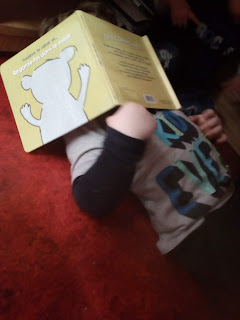 The book ends with a big flap that needs lifting, and behind the flap… a mirror! Each little one was delighted to see that they too were included in the book. That's not something you see every day!

We continued on with our own game of Follow the Leader, jumping up and down, bending over and, following one of the babies' example, falling flat on our faces (on a bean bag!). 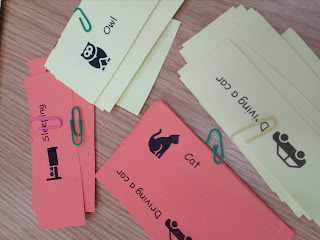 We added a few charades to the mix and things got even livelier. All the while, the youngest members of the audience were plied with mirrors and spent some fascinating minutes looking at the smiling kid in front of them.

As promised, here are the links to the songs and videos!
Funny Babies Doing Exercises Compilation:

Posted by Juliette Saumande at 14:53 No comments: Links to this post