Exciting stuff always happens when you're away eating redcurrents and pizzas topped with foie gras (separately). UNESCO has just designated Dublin as a City of Literature, one of only four in the world (the others being Iowa City, Melbourne and Endinburgh). So well done Dublin, well done you, well done us! For more info and events, check out the dedicated website.
Posted by Juliette Saumande at 13:06 No comments: Links to this post 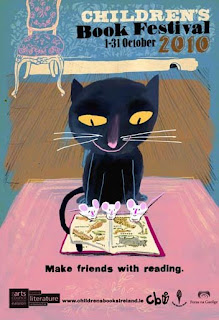 CBI has just launched the poster for the next Children's Books Festival. Nothing to do with being a cat person or anything, but I think Kevin Waldron's picture is deadly. There'll be posting galore about the festival (taking place throughout October) and Bookfest (the accompanying reading guide), but in the meantime, you can get more details here.
Posted by Juliette Saumande at 13:09 No comments: Links to this post

Tell me what you read | Vamoose, Mr Gum and Not the End of the World

It's been a good few weeks reading-wise and I've managed to do some (marginal) damage to my mountain of 'To Read' books. Among which...

Andy Stanton and his crazy cast of characters are back and in splendid form in this seventh instalment. Mr Gum himself is as abominable as ever, Billy Williams the Third makes a fantastic centaur and there's a sulking aphid called Penelope. Some very good laughs and very good lines (plus a goblin burp duet of ineffable quality). Yet, I still think Mr Gum and the Dancing Bear (Book 5) trumps it, because its plot is stronger.

About a million light-years away from Lamonic Bibber... Not the End of the World is another incredible performance from Geraldine McCaughrean. It's intense, it's superbly written, the concert of voices (human and animal voices) works wonders and the whole thing brings home a few truths about what it is to be human and, you know, what life is all about. And all that with buckets of modesty. McCaughrean is a craftswoman who knows how to polish her prose and tell a cracking good story. More!

And now for something totally off the wall. Vamoose is published by Puffin in their new Pocket Money Puffins series, which means it's a short piece, made shorter still by the addition of two extracts from other books by Meg Rosoff. That said, Vamoose is just hilarious. I was giggling under the blankets as I read it and got a few grumpy grunts and kicks from Persons Unnamed as a result, but it was worth it. Rosoff's strength in this one is in what remains unsaid, so I won't even give you a plot description. You'll just have to read it.
Posted by Juliette Saumande at 13:44 No comments: Links to this post

Alcatraz versus the Scrivener's Bones 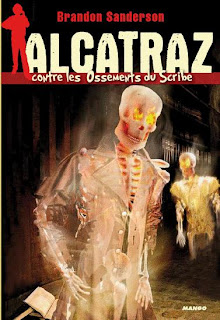 The second book in the Alcatraz series is soon coming out in France, translated by yours truly. We've just received the cover and I couldn't resist showing you, again, the two different versions. Posted by Juliette Saumande at 15:46 No comments: Links to this post

I write like
Stephenie Meyer
I Write Like by Mémoires, Mac journal software. Analyze your writing!
Have you heard of this new website yet? Type or paste a sample of your prose, close your eyes, hold your breath... and discover if you write like James Joyce or Haruki Murakami. Here's how it works:


Check what famous writer you write like with this statistical analysis tool, which analyzes your word choice and writing style and compares them to those of the famous writers.

Now, I tried it with a few paragraphs of Mad Cap and, apparently, well, you've seen the pic at the top of this post... I suppose a great carrier awaits me. Even if the page announcing my result also included an ad that went:

You'll be impressed to know that this blog was composed in the style of HP Lovecraft!
Posted by Juliette Saumande at 14:02 No comments: Links to this post 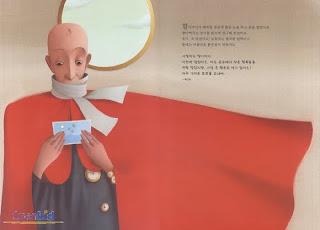 I mentioned before that In Search of Happiness had been translated into Korean. It's taken some clever paneuropean googling to find some pics, but I've got them now. Enjoy! (and if anyone can tell me what the hero is called...) 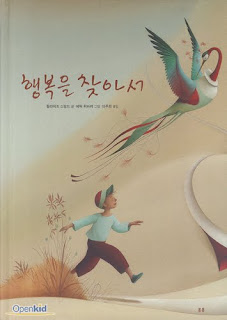 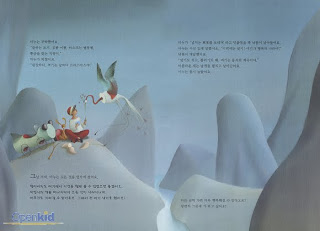 And here are some of my princesses from an earlier book (10 Histoires de Princesses):
Left: Tidy-Your-Palace
Right: Princess O'Pea 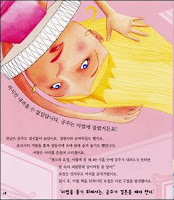 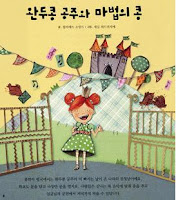 (they must have had some fun translating my Scottish pea pun...)
Posted by Juliette Saumande at 12:48 1 comment: Links to this post 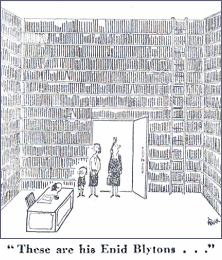 A most impressive panel (including Mary Esther Judy, Amanda Piesse, Siobhán Parkinson and David Rudd) discussed good old Enid on Newstalk's Talking History last Sunday. If you were busy running after a football in South Africa and want to know if the mother of Famous Five et al. was ''the Margaret Thatcher of children's literature", head over here. And if you're a total fan, the Enid Blyton Society (where this post's pic is from) is for you!
Posted by Juliette Saumande at 14:15 No comments: Links to this post

And not a wrinkle on them! Here's a very interesting article about their creator, Tove Jansson, and the great hippo-like troll family, read in the Guardian. Six new Moomin books – four picture books, and a sticker and colouring book – are published by Puffin this year. Finn Family Moomintroll also features in Nuffin Like A Puffin, an exhibition at Seven Stories, Newcastle from 17 July until June 2011 (more details here). I definitely have to go to Newcastle one of these days... Meawhile, I can just dream about the aforementionned Moomin Cookbook...
Posted by Juliette Saumande at 09:23 1 comment: Links to this post

Tell me what you read... | Blood Red Snow White by Marcus Sedgwick 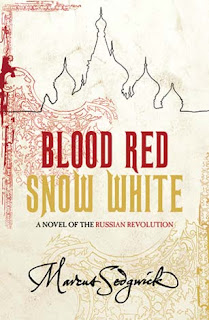 Most of you will have already heard me raving about this book. Here's why.

Based on the historical events that shook Russia between 1916 and 1919, Blood Red Snow White takes an unusual angle on the Russian revolution by focusing on the amazing story of children’s writer Arthur Ransome. Living in Saint-Petersburg, where he was researching Russian folklore, Ransome became a war correspondent, then a chronicler and first-hand witness of the revolution, a trusted interlocutor of Lenin and Trotsky, a spy for Britain and, perhaps, a double agent. In the midst of this political whirlwind, Ransome managed to write Old Peter’s Russian Tales and fall in love with Trotsky’s secretary, Evgenia Petrovna Shelepina. This is, in short, the story Marcus Sedgwick ambitiously sets out to tell. The result is an impressive mixture of history, spy novel, fairy tale and love story.

The look of the book is resolutely old-fashioned, stressing the historical aspect of the novel. The pages look like they have just been roughly cut open and the end-papers are made of old maps of Western Russia; real maps from an atlas, this is no fantasy. And yet, these maps seem to invite the reader to a game of Risk, flagging both the themes of politics and make-believe. Throughout the book, the text is printed in dark (blood) red ink, blurring the boundaries between concrete and abstract, and announcing the conflict between reality and fiction.

Part One is told as a fairy tale, Ransome’s Old Peter Russian Tales style, with its use of imagery and its assumption that everything is possible, from magic to talking bears. Part Two, titled ‘One Night in Moscow’, belongs to the tradition of spy novels. Here, names are named, time is minutely indicated and the use of present tense creates a sense of immediacy and conveys the impossibility for the hero (Arthur) to look ahead. This section is anchored in realism. In the final part, the text switches to a first person narrative by Arthur Ransome himself. The accent here is on romance (with its fair share of adventure), but it is also the section of the book where realism and fairy tales are brought together.  But this is not escapism. It is fairy tales barging into the real world and the real world adjusting to the fairy tale. Great stuff!
Posted by Juliette Saumande at 08:49 2 comments: Links to this post 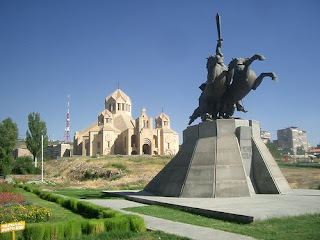 UNESCO in association with the three major international professional organizations from the world of books has announced that Yerevan (Armenia) was to become the World Book Capital City for the year 2012.


"The city of Yerevan was selected “for the quality and the variety of its detailed, realistic, grass-roots programme, focusing on universal issues, and linking all the aspects and actors of the book chain” .... Yerevan built an exciting programme focusing on freedom of expression, copyright, and activities for children who will be tomorrow’s readers, authors and publishers." (more info here and here) 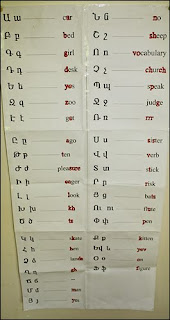 2012... you never know, by then, I may have finally mastered the Armenian alphabet (3 attempts so far and I can only confidently identify 'a' and 'r') (sorry, one type of 'r' not all of them).

Then, I'll be able to read my way through the greatest works of Armenian literature. Here's hoping! 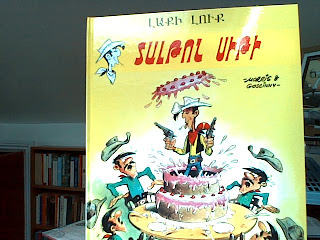 Posted by Juliette Saumande at 11:59 No comments: Links to this post

Learning with the best

Fancy a bit of escape and a lot of writing? The Dingle Writing Courses are running again this year and the cast of tutors is as impressive as ever. If writing for children is your thing, you'll be in for a treat as Kevin Crossley-Holland (of the Arthur trilogy fame, among other excellent books) will be looking after you. Here's his description of his own course:


Children's fiction can be affectionate, social, mythic or simply playful. This course will focus on breaking new ground rather than work in progress. It will be a shared experience of rapid exercises which celebrate language and the imagination. It will also examine how to tell, retell and use motifs from traditional tale.

Kevin's course will take place from the 8th to the 10th of October. All the details on this and other classes (starting to write, poetry and fiction) can be found here.

Posted by Juliette Saumande at 13:21 No comments: Links to this post